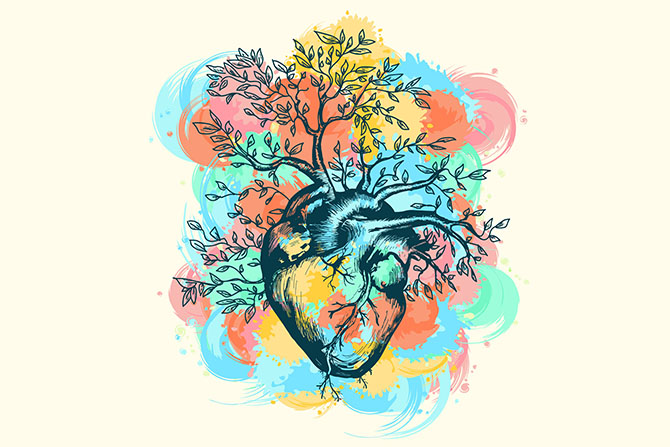 More than 100 years ago, cardiovascular disease was almost entirely a disease of men. Fifty years ago, the most popular explanations for gender-related differences in heart disease were lifestyle, including less stress for women (who were considered ‘happy homemakers’), and/ or the fact that women did not generally smoke until World War II. Today, women who have not yet reached menopause tend to have lower rates of heart disease compared to men. Postmenopausal women in North America, on the other hand, have equal rates of heart disease, with more women dying of heart attacks. Women in general also tend to have better high-density lipoprotein cholesterol levels (the ‘good’ cholesterol) and when women have higher good cholesterol they tend to have less heart disease than men.

We have presumed for decades that women are protected from coronary disease by a built-in factor, presumably female sex hormones. This was based on the concept that all health issues in postmenopausal women have to do with declining female hormones. Several population studies suggested that a woman’s universal protection against heart disease is due to estrogen. And the medical community has perpetuated this belief because coronary heart disease is less common in women before the onset of menopause. Heart disease is more common in women who go through a premature natural menopause as well as more common in younger women who have had both ovaries removed during a hysterectomy.

Population-based evidence that heart disease death rates increase after menopause due to estrogen is actually weak. According to very thorough research published in the Journal of Clinical Epidemiology, there is very little evidence of a dramatic increase in heart disease due to estrogen levels in women. We do know that heart disease risk increases after menopause, but it has not clearly been shown to be to the result of declining estrogen. Researchers who do not support the theory that declining estrogen levels put women at risk of heart disease feel that estrogen may not be a primary player in heart disease development as it is for breast cancer. These researchers believe that the development of heart disease may have many factors, making it much more difficult to prove estrogen’s major role.

Some suggest that estrogen is simply not a major factor in the development of heart disease at all. In fact, there are actually no studies, according to research published in the British Medical Journal, that have shown estrogen levels in the body can predict cardiovascular disease in postmenopausal women. Estrogen levels are very poorly predicted in blood and none of the cardiovascular studies used saliva testing to get a more accurate picture of estrogen. Plus, there are many other hormones involved in heart-health protection, including testosterone and progesterone.

Hormone replacement therapy (HRT)—which generally includes synthetic conjugated equine estrogens (Premarin) and synthetic progestins like Provera (progestins are not progesterone)—has been available since the 1940s. Early observational studies suggested favorable effects in postmenopausal women using HRT. An increase in good cholesterol is seen in women using estrogen alone. And a deluge of other observational studies followed in an attempt to prove that HRT was the answer to postmenopausal coronary heart disease.

But interestingly, along the way, most studies showed an increased risk of blood clots and heart attacks in women who had just begun HRT. Then the Women’s Health Initiative study, which was designed to end the confusion once and for all about whether HRT was safe and could prevent or reduce the risk of coronary heart disease in women, was prematurely and abruptly halted in 2002 due to safety concerns. Was HRT found to be beneficial for heart disease? The answer was a resounding ‘No’ and now a paradigm shift in the way doctors treat coronary heart disease in postmenopausal women is occurring. Let’s look at the major studies along the way.

The Coronary Drug Project completed in the 1960s was the first clinical trial designed to determine whether estrogen reduced the risk of coronary events. Men with known heart disease were randomly assigned to one of five active therapies or a placebo. Two of the study medications were conjugated estrogens at a daily dose of either 2.5 or 5.0 mg; the estrogen arms were stopped early because estrogen-treated men had an increased rate of blood clots and heart attacks. After estrogen failed to protect men, no large heart-related estrogen trials were initiated in men or women for the next 23 years.

Yet despite the absence of clinical trial data, by the middle of the 1990s, it was accepted as dogma that HRT would prevent coronary heart disease in postmenopausal women. The medical profession went so far as to consider any doctor who did not recommend estrogen therapy unethical. In the wake of this, one very important researcher, Stephen B. Hulley, believed that a clinical trial showing safety and benefit in women was essential. He obtained funding for the secondary prevention trial that came to be known as the Heart and Estrogen/Progestin Replacement Study (HERS).

The HERS was the first large clinical trial specifically designed to evaluate whether estrogen plus progestin therapy reduced the risk of coronary events in postmenopausal women who already had coronary disease.

This study, funded by Wyeth-Ayerst, was a multiple center, randomized, double-blind, placebo-controlled trial. It included 2,763 postmenopausal women averaging 67 years of age. Each woman had an intact uterus and documented incidences of coronary heart disease. They were given a single daily tablet containing conjugated equine estrogens (0.625 mg) and medroxyprogesterone acetate (2.5 mg), or a placebo. The study lasted about four years. The HERS showed no difference in coronary heart disease outcomes between the treatment group and placebo group. Non-fatal heart attacks or coronary heart disease deaths occurred in 179 women in the hormone group and 182 women in the placebo group, meaning there was no difference. This result occurred even though LDL (the bad cholesterol) decreased and HDL (the good cholesterol) increased in the group getting HRT.

So there was no benefit. And the really scary information is that in the first year of treatment, there was a significant 52 percent increased risk of coronary heart disease events in the group using hormones. Half of the women were then followed for an additional 2.7 years and they did not show any evidence of long-term cardiovascular benefit. Stroke and peripheral artery disease also did not differ between the group getting HRT and the group getting a fake pill. In other words, HRT did not make any difference and actually increased risk of adverse coronary event in the first year of treatment. Further major studies showed an early increase in coronary death and non-fatal heart attacks in those being prescribed HRT. But the medical community still continued to prescribe hormones for the prevention and treatment of heart disease. And more women died as a result.

Great debate ensued over why the trial results did not match the belief. Researchers said the women were too old or too sick. But this was not true; the average age was 67 (the average age whereby cholesterol-lowering drugs are researched). And the women were not too sick. Most had been excluded if they had had diabetes, congestive heart failure, a recent heart attack or vein disease. And over 75 percent of the women were compliant in the study. The one valid criticism of the study was that it was only a single trial, possibly administering the wrong hormones. But many smaller studies also showed increased risk of cardiac events. And we agree that they were prescribing the wrong hormones, including horse estrogens and synthetic progestins, which are not identical to the estrogens made by the body.

By this point, there were major studies showing an early increase in coronary death and non-fatal heart attacks in those being prescribed HRT. But the medical community still continued to prescribe hormones for the prevention and treatment of heart disease. And more women died as a result.

In this study, a team of researchers completed an un-blinded trial with 255 women who had proven heart disease. The women, averaging 66 years of age, were either given no treatment or a 17 ß-estradiol patch (2.5 mg). No synthetic progestins were given. The patch was administered alone every four days to women without a uterus or, for women with a uterus, over 14 days, followed by four patches containing 3 mg of 17 ß-estradiol and 4 mg of norethisterone. However, the study was eventually halted due to lack of benefit. After approximately 31 months, it was found that there were no differences between the group receiving hormones and the group having no treatment. But the researchers did find that, beginning in the first year, the hormone group had higher rates of all cardiovascular events except non-fatal heart attacks. Neither an increase in good cholesterol nor a decrease in bad cholesterol was observed, and this was expected due to the fact that the hormones were delivered transdermally (via the skin).

The Women’s Health Initiative Study (WHI) was supposed to put to rest all concerns that arose from earlier hormone studies. This randomized, double-blind, placebo-controlled clinical trial was designed to look at coronary heart disease prevention in the form of hormone therapy, diet and calcium supplementation on disease outcomes in healthy postmenopausal women aged 50 to 79 years. In the hormone arm of the study, 16,608 women who had an intact uterus were randomly assigned to receive a single daily tablet containing conjugated equine (horse) estrogens (0.625 mg) and medroxyprogesterone acetate (2.5 mg), or a placebo. This was the same treatment given in the HERS. Another 10,739 women without a uterus were randomly assigned to placebo or conjugated equine estrogen (0.625 mg/d) without synthetic progestins. The study evaluated fatal and nonfatal heart disease and breast cancer as well as bone health.

After the first two-year follow-up, and then after one to two years, the Data and Safety Monitoring Board advised researchers that there was an early excess risk of heart attack and stroke in women assigned to both the estrogen arms. All women were sent a letter to this effect, but most women continued the treatment anyway. This is surprising considering the risk of death. In 2002, it was found that the combined estrogen-progestin arm of this study was linked to a 29 percent increase in heart attacks, and a 41 percent increase in the incidence of stroke. Further negative effects resulting from the HRT were also found, affecting incidence of breast cancer, Alzheimer’s dementia, and even hearing loss. Even though many earlier trials showed cardiovascular risks, this trial in particular caught the attention of the media.

The PEPI Trial and Bioidentical Progesterone

The Postmenopausal Estrogen/Progestin Interventions trial was a three-year trial involving 875 women who were perimenopausal (within 10 years of menopause). This trial was not designed to study disease outcomes.

To protect the uterine lining from continuous stimulation by estrogen, most physicians prescribing standard estrogen repletion therapy (ERT) combine it with Provera®. If you ask if it is progesterone, you will probably even be told that it is—but it is not. It is medroxyprogesterone acetate, which is natural progesterone altered by the addition of a molecule to make it patentable and more orally absorbable. This molecule alters Provera’s® effect on tissues other than the uterus.

There is, however, an even more compelling reason to avoid Provera®. Researchers have showed that Provera® can reverse by 50 percent the coronary-artery-dilating effect of estrogens and that bioidentical progesterone does not have this negative effect. This evidence comes from recent studies by a number of different researchers, and thus is unlikely to be disproved.

What Is a Woman to Do?

The WHI study has created a paradigm shift in the way doctors treat heart disease. No longer is it a medical sin to not prescribe hormones to women. Now we realize that caution is needed when prescribing hormones to any woman.

A Warning About Hysterectomies

The Truth about HRT and Heart Disease